Despite its name, WebAssembly is not limited to the browser. In fact, it's potential outside of the browser is at least as interesting. In this post I talk about some experimental work that we have done in combining WebAssembly with Python.

In my previous post, I argue that WebAssembly would be a very interesting target for (new) programming languages that are intended to run fast, and run "anywhere". Not long after that publication I gave a talk at EuroScipy 2017 about WebAssembly. At the same conference, Windel Bouwman gave a talk about his PPCI project: a compiler infrastructure written in Python. The two of us teamed up, and in the train on the way back we managed to create a prototype in which Python consumed WebAssembly code and ran it.

In the months that followed, we've continued working on it, and this culminated in a talk at EuroPython 2018, in which we show what we had achieved. In this post I dive into some of the details.

WebAssembly is not only for the web!

Although WebAssembly is primarily designed for the web, its use outside of the web has been taken into account from the beginning. And it has great potential there ...

For one, WebAssembly is a well-designed open standard for fast executable code. Let this simple fact sink in; once we have good WebAssembly runtimes on all major operating systems, we can build true cross-platform binaries! I also don't expect it to take long before mobile devices natively support WebAssembly.

Since WebAssembly is well-defined and makes few assumptions about the underlying hardware, it is excellent for taking on the role of an intermediate representation (IR). For instance, compile language X to WebAssembly, and then compile the WebAssemby to machine code for an embedded device (e.g. Xtensa).

Further, every WebAssembly module very clearly specifies what it needs, and only gets what it needs when the host environment provides it. This means that users can potentially have a lot of control and insight into what an application can do on your system. This feature is critical in the browser, but about as important on mobile (i.e. app permissions), and actually, isn't it odd that we don't have this on desktop too?

How can Python use WebAssembly?

For most compiled languages (e.g. Rust) the advantage of adopting WebAssembly is pretty simple: compile to WebAssembly instead of the normal compile target, and now you can run it in a browser.

Python is not a compiled language, which means that things are not so straightforward. But this does not mean that the Python community cannot make use of WebAssembly. I will discuss three potential uses below.

This has several interesting and useful use-cases. But would I use this approach to create a web application? Probably not; the WebAssembly code that needs to be loaded (the Python runtime) would be pretty big, and the code would not be faster than the original runtime.

Examples that use this approach:

Compile a subset of Python

Despite this restriction, an approach like this could be very useful to write functions that can be used inside a web application. Or ... to write code that runs at native speed. The example below shows the resemblance with Numba:

In the talk I show a demo of this, and yes, the code indeed runs much faster than plain Python!

It should be noted though, that the speed at which code like this can compile and run is highly dependent on the WebAssembly compiler (the part that compiles WebAssembly to native machine code). We're now doing this in pure Python with PPCI, which makes the compilation slow, and it does not perform many optimizations.

In comparison, Firefox does amazing things to compile WebAssembly modules. Maybe it's possible to leverage Mozilla's efforts and use its WebAssembly compiler on desktop, from Python?

Python as a WebAssembly platform

In PPCI, we've created tooling to load binary WebAssembly modules and examine their imports and exports. Using an API very similar to that of JavaScript, we've made it possible to provide imports in the form of Python functions. ... yes, you can call back into Python functions from WebAssembly code that is running natively!

In that way, it is possible to take multiple WebAssembly modules—which can be created with any language—and bind them together in Python. This is what Python has always been good at: binding things together. But now the things are self-contained modules that can each be written in another language. 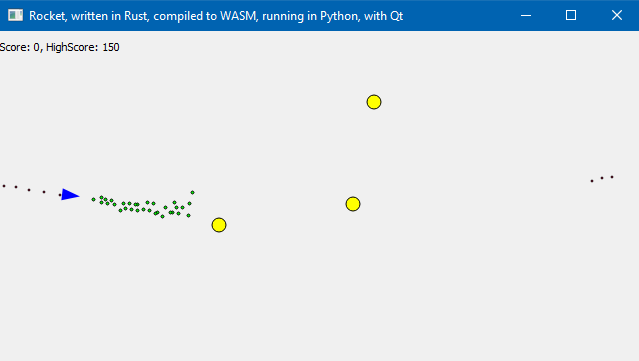 To illustrate this idea, we took the WebAssembly module of the Rocket game. We did not read any docs, we just took the binary WebAssembly module and loaded it into PPCI. We examined the imports and exports and that was all we needed to write the supporting Python code to make the game work.

Next, we wrote an AI that is capable to play the game automatically. We wrote this in C, which we compiled to WebAssembly. Now we had two WebAssembly modules, which we bind together in Python to create a complete system of an AI playing the Rocket game :)

WebAssembly is coming and it's awesome. It definitely has its use on desktop too, and there are several ways in which the Python community can make use of it!