New task: don't forget to organize your ideas and knowledge too!

Like many people, I use todo lists to organize my tasks. I’ve tried different todo-list solutions and even made a few apps myself. In this post I try to explain what I learned from these tools, why organizing knowledge and ideas may be more important than organizing tasks, and why I like Trello so much. 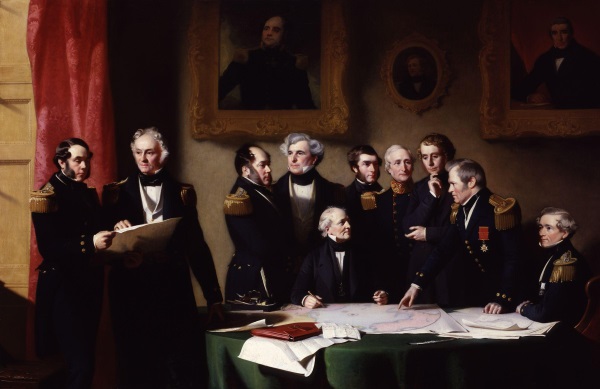 Some tasks assigned to you originate from someone else. But (I hope) that there are also many tasks that originate from yourself. Where do tasks come from in that case? Most tasks are part of a bigger plan, which was in its turn formed from ideas, ideals, and a certain purpose.

Managing tasks is only one side of the medal. You may be very efficient in executing your tasks, but if you neglect the origin - your goals and ideals - you live an empty life.

I believe everyone has a purpose, and in essence this purpose is to make yourself useful, by doing something that you love doing. And the main goal in life, as I see it, is to find that purpose.

Starting with a purpose, you develop ideas, and by combining ideas you create plans, which in turn lead to concrete tasks towards achieving your goals. Organizing your knowledge, ideas and plans can help you during this process of creation.

Many todo lists are a simple one-dimensional lists of tasks. In many cases this suffices. I used to kept track of tasks using a text file (in my dropbox folder for easy access). I've also tried Google tasks, Remember the milk, Evernote, and others.

Although most implementations allow keeping track of multiple lists, this approach provides little means to structure tasks and set priorities. I do think common todo lists can be useful. But the most useful variant is often just a piece of paper to write down the things planned for this day or week. 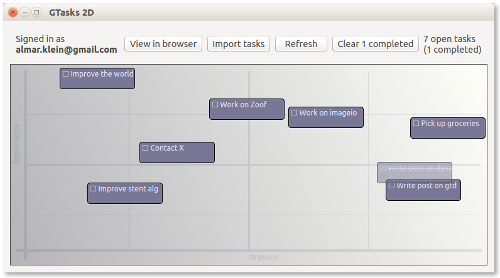 When I learned about it, I liked the distinction between priority and importance that is promoted by the Eisenhower matrix. I liked how this method uses two dimensions to structure tasks. Therefore I made a small Python+Qt application based on this idea. It uses Google tasks as a back-end, so that tasks can be managed from anywhere. All tasks sit on a 2D canvas. The more to the right, the more urgent it is, the more to the top, the more important it is. It did give a nice overview of tasks, but while using it, it quickly became cluttered with tasks, and at some point I needed to move tasks around to prevent them from overlapping. I thought about filtering tasks based on tags, but this method just did not seem to scale up very well.

This was also when I started to realize that what I wanted was to organize my thoughts, of which organizing tasks is just one aspect. I wanted to keep notes and a spark file). These do not really fit in an Eisenhower matrix, 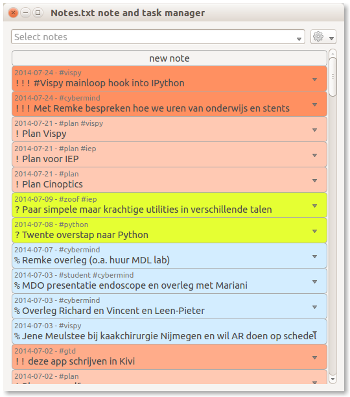 The next app I made was inspired by todo.txt. I wanted to keep it simple and always accessible. Therefore the app stored the data in a text file stored in my Dropbox folder. It uses a simple protocol that is human readable. By default, the app shows all items in chronological order. By writing a tagname in the search field, the app will show only tasks marked with this tag. The same search field allows plain-text searching through my all notes/tasks/ideas, or selecting only tasks or ideas.

This solution has worked quite well for me for a year or so, until I learned about something better ...

edit (June 2017): After hardly using Trello for almost 2 years, I've revived this little app again, and use it almost daily 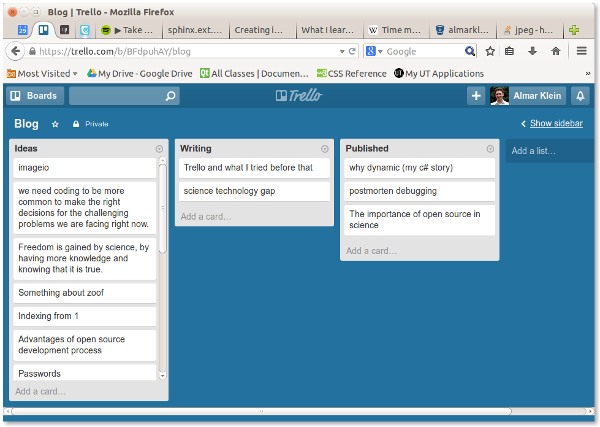 I've been using Trello, for a while now and absolutely love it. Trello is brilliant in its simplicity; it offers simple tools to organize basically anything you want. This is at the same time its biggest pitfall, because you have to think about how you are going to organize things. In fact, I had tried Trello before, but then thought that it did not meet my needs. Only when I read about it again and tried it more seriously, I realized its true power.

With Trello, you can organize information in four levels:

For myself, Trello is in many ways what I was looking for:

How to use Trello

Trello can be used in many different ways. You'll have to experiment to find out what works for you. Fortunately it is easy and intuitive to move things around. Here are some ideas:

For more example see e.g. this post. Above all, I encourage you to just try it. Create lists and cards, don't be afraid to move things around to search for a better structure.

Organizing your tasks is great to be productive, but it's equally important to organize your knowledge and ideas, so that you are being productive in the right direction. For short-term stuff I still prefer pencil and paper. But for everything else, I think Trello does a really good job.