We need more visualization libs - and a protocol to bind them

We have a rich ecosystem of visualization libraries, each with their own API. By splitting our libraries in a user-facing part and a rendering backend, and defining a standard to allow all these to connect, we can have a rich visualization ecosystem while users only have to learn one API. 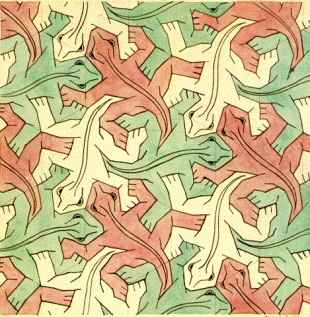 Image by Escher via Wikimedia (fair use)

As I mentioned in a previous post, we seem to be getting different visualization libraries which are each good at a particular task. I mentioned Bokeh and Vispy in particular: the former does very well in the browser, but it can't do 3D. The latter has awesome performance by making use of the GPU, but it does not work (well) in the browser. And neither can export vector images like Matplotlib does. The fact that we get more and more cool visualization libraries is awesome, but it's not making it easier for our users, which are usually researchers who just want to get things done.

Imagine a scientist who works with 3D data, who makes some plots that should be shared online, which also need to export to EPS for a paper. This person would now need to learn three different visualization libraries.

The main problem is that users need to learn different API's to perform different visualization tasks.

The solution I proposed earlier was basically to discuss building a new library that has it all. After thinking this over, I think that's a terrible idea:

I think that there is a better approach to fix the problem. One that is less crazy, and allows for a much easier transition.

We need a split

If we separate the user API and the rendering part of a visualization system, and define a protocol for the communication between the two, it should be possible to connect different rendering systems to the same front-end (i.e. user API); the user only needs to learn how to work with one library, and can switch between rendering backends depending on the needs (e.g. rendering to SVG, rendering something 3D, or rendering in a browser).

I suspect that the number of front-ends will first expand and then settle on a few common libraries. For the rendering backends, I think we would see a much broader array of options, including tools to support very specific visualizations.

State of the art

This idea is not new. Altair for instance, proposes something very similar. Also Bokeh is somewhat organized in these two parts, except that the protocol is not standardized.

However, the above projects are very much aimed at visualizing the relation between 2 or more 1D data structures (i.e. plotting and charts). The visualization of 3D data, let alone fancy specific data structures seems an afterthought.

Further, these approaches are based on the serialization of a scene into one static representation (e.g. a JSON structure). What about interaction? What about changes? Bokeh does interaction with the Python process via the backbone model and AJAX to update data, but can we not make this part of the protocol?

Instead of defining a static data structure, I think we should formalize a protocol to represent changes.

Here's a stab at what such a protocol might look like: consider a simple core set of commands to create a tree of objects with attributes. Each command consists of a message written as a "tuple". This tuple can exist as an object, or be serialized so it can be send over a socket or saved to disk. There are just three commands to manipulate objects:

The code that produces these commands should manage the object_id's of the objects. For data we need something similar, allowing setting and (partial) updating of data:

The renderer can also communicate back (e.g. when the value of a slider has changed):

These commands form a foundation, on top of which we can define a standard set of "types" and their "attributes". E.g. we can define that the "Line" type shows a line, and that it has attributes "width" and "color". The formulation of the standard would be an ongoing process and should probably involve a group of people with representatives from all major visualization libraries.

Naturally, each rendering library can also specify its own types, e.g. Vispy would have a objects with attributes to allow custom shading. Similar, rendering libraries do not necessarily have to import each part of the standard (e.g. Vispy may not support pie charts).

Here is an example of how this protocol could like for a simple plot with a red line:

This is not as readable as a JSON structure would be, but the point is that changes can be handled by just adding commands. Also, it's trivial to transform a series of commands to a JSON structure, or the other way around.

Having the proposed protocol in place would mean that Bokeh and Vispy can keep doing what they're good at, and let exporting to vector graphics be handled by Matplotlib. New user-facing libraries like Holoviews would just work for all available rendering engines. And new rendering engines like what Cyrille Rossant proposes should just work without the user having to change the code. Also, I would love to make a simple volume renderer in WebGL, which would allow existing code for displaying a volume to be exported to static HTML.

Maybe we could eventually have some sort of auto-selection for the backend, such that visualizations get shown in the backend that is most capable of handling what the user spelled out. If that works well, people could make dedicated renders for specific visualizations, which would Just Work for any user.

Here's what I think we need to do to make Python's visualization ecosystem more friendly and powerful:

In this way, a user can learn just one API and still "have it all", by using a different rendering backend for different needs.